We are Timber Country Coca-Cola Beverages.  Owned by The Hanna Family since 1959, we proudly serve Douglas, Coos, Curry, Josephine, Jackson, Lake and Klamath counties in Oregon, as well as Siskiyou and Del Norte counties in Northern California.  We operate warehouse facilities in Roseburg and Medford with our corporate headquarters located in Roseburg.

Originally, The Coca-Cola Bottling Company of Roseburg was purchased by LeRoy and Betty Hanna soon after the renowned “Roseburg Blast” in which the Coca-Cola Plant and most of its assets were destroyed by a devastating explosion.  In September of 1959 LeRoy and Betty Hanna purchased the Coca-Cola franchise, one delivery van, and the remaining assets in the trade.  They went on to rebuild the bottling line and operate the business until June of 1990 when the business was purchased by Bruce and Teresa Hanna.  In April of 2017 Bruce and Teresa Hanna acquired significant additional territory formerly belonging to Coca-Cola Refreshments.

In addition to the beverage business, Bruce and Teresa also operate Timber Country Vending, a sister company which operates from the Roseburg offices with an additional satellite warehouse in Wilsonville, Oregon.

Timber Country Coca-Cola Beverages is known for being committed to its employees, customers, and the communities it serves.  Our company and its employees take great pride in our role sponsoring various projects, organizations, and celebrations that promote our quality of life in Southern Oregon and Northern California.

Relationship building starts with our employees.  We take pride in watching them grow in their careers.  We share in their lives as the raise families, coach teams, attend graduations, and participate in local events.

Our company is made up of over 165 men and women.  We are proud that many of our people have chosen to spend their entire career with us.  We have positions in Sales & Merchandising, Service, Delivery, Administration, Vending & Warehousing. If you are interested in joining our team, check out our job openings on the Careers page. 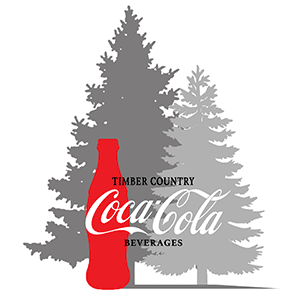